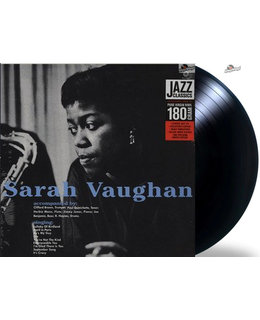 1954 - 2014 EU repressed on 180g vinyl - A superb collection of jazzy vocal tunes, with Vaughan using her voice as an instrument - one of the most important 'jazz meets vocal' sessions ever recorded! One of the greatest vocalists of all-time, during her l

2014 EU repressed on 180g Vinyl - A superb collection of jazzy vocal tunes, with Vaughan using her voice as an instrument - one of the most important 'jazz meets vocal' sessions ever recorded!

One of the greatest vocalists of all-time, during her lifetime Sarah Vaughan garnered worldwide accolades for her incomparable versatility, which musically bridged all the generational gaps. Vaughan has been called “a complete artist,” one who earned the respect of all jazz and contemporary musicians alike.

"The Jazz World, instrumentally and vocally, may be said to be split into two camps. There are the followers and the followed; the imitators and the inimitable. True, there are many who have managed to graduate out of the first class into the second (didn't Dizzy Gillespie once sound just like Roy Eldridge?), but in the case of Sarah Vaughan it can safely be assumed that this talent has been sui generis from the very beginning.

"It is doubtful whether anyone, including Sarah herself, is likely to be able to find any more completely satisfying representation of her work, or any more appropriate musical setting, than are offered in this LP. These sides are sure to rank among the foremost achievements of her decade as a recording artist." - original liner notes

Tracks:
A1 September Song
A2 Lullaby Of Birdland
A3 I'm Glad There Is You
A4 You're Not The Kind
A5 Jim

B1 He's My Guy
B2 April In Paris
B3 It's Crazy
B4 Embraceable You 4:50
B5 Lullaby Of Birdland (Alternative Take)

This 1954 studio date, a self-titled album recorded for Emarcy, was later reissued as Sarah Vaughan with Clifford Brown to denote the involvement of one of the top trumpeters of the day. Vaughan sings nine intimate standards with a band including Brown on trumpet, Herbie Mann on flute, and Paul Quinichette on tenor, each of which have plenty of space for solos (most of the songs are close to the five-minute mark). Vaughan is arguably in the best voice of her career here, pausing and lingering over notes on the standards "April in Paris," "Jim," and "Lullaby of Birdland." As touching as Vaughan is, however, Brown almost equals her with his solos on "Lullaby of Birdland," "Jim," and "September Song," displaying his incredible bop virtuosity in a restrained setting without sacrificing either the simple feeling of his notes or the extraordinary flair of his choices. Quinichette's solos are magnificent as well, his feathery tone nearly a perfect match for Vaughan's voice. Ironically though, neither Brown nor Quinichette or Mann appear on the album's highlight, "Embraceable You," which Vaughan performs with close accompaniment from the rhythm section: Jimmy Jones on piano, Joe Benjamin on bass, and Roy Haynes on drums. Vaughan rounds the notes with a smile and even when she's steeping to reach a few low notes, she never loses the tremendous feeling conveyed by her voice. In whichever incarnation it's reissued, Sarah Vaughan With Clifford Brown is one of the most important jazz-meets-vocal sessions ever recorded.