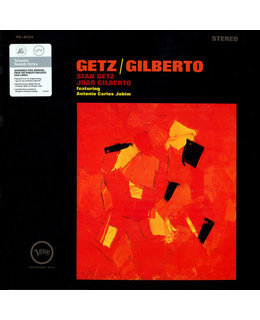 2020 US =Acoustic Sounds Series= features all-analog, remastered 180-gram vinyl in deluxe gatefold packaging.   The marvelous album, Getz/Gilberto, had a profound influence upon the face of jazz and American popular music. The stunning 1964 collaboration between Stan Getz, one of the most respected tenor saxophonists of the era, and the remarkable Brazilian guitarist Joao Gilberto, launched the bossa nova craze and the career of Joao's wife Astrud Gilberto with iconic hit " The Girl from Ipanema ".

"Acoustic Sounds/Universal Music Group has released a vibrant 180-gram stereo vinyl of Getz/Gilberto. Engineered by George Marino (Sterling Sound) under the supervision of Acoustic Sounds founder Chad Kassem, this is a vibrant analog update of a jazz essential. ... The overall mix of this remastered 180-gram vinyl is excellent. The stereo separation is precise, with double bass/percussion on one channel and guitar/piano on the other. Getz' distinctive tenor is centered, as are the vocals. ... The pressing is superior with no hisses or pops." — 5 stars / Robbie Gerson, Audiophile Audition, Aug. 12, 2020. Read the entire review here.

Two names spring to mind upon hearing the words jazz and samba, namely those of Stan Getz and João Gilberto. But really one should be thinking of Antonio Carlos Jobim, who, with his composition from 1958 "Chega de saudade," first created the type of Brazilian samba that is known today as bossa nova. It was with one of Jobim’s songs, "Desafinado," that bossa nova began its triumphant conquest of the USA.

In 1962, Stan Getz made the work widely known when he recorded the number, together with Charlie Byrd, on his album Jazz Samba. It was this recording, along with Focus (1961), which was responsible for Getz’s definitive comeback in the USA at that same time. Jazz Samba opened the floodgates to a new musical vogue, and although cool jazz had been swept aside by hard bop, the reserved and melancholy touch of Getz’s style once again became all the rage.

It is really not at all surprising, therefore, that the album Getz/Gilberto, recorded in March of 1963 for the Verve label, was a winner right from the very start, bringing together as it did the two godfathers of samba Jobim and Gilberto with their American brother Getz. The songs, all of them now classics in their own right, are filled with the joy of life, peace and harmony.