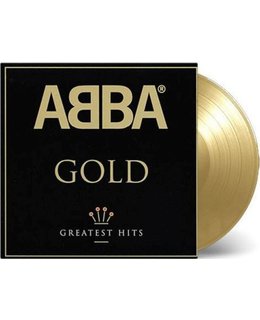 (1993 ) 2019 reissue on gold vinyl 180g 2LP-Sweden's biggest musical export! Included are a full 19 remastered hits, most notably Dancing Queen; Take a Chance on Me; The Winner Takes It All; Waterloo; Fernando , and The Name of the Game . 76 minutes of AM

2021 reissue on 180g gold coloured 2LP-If you only own one ABBA record it's probably this one. ABBA's 19-song Gold collection was the first hits compilationand, appearing after a period of several years in which their music had been off the market, was a welcome addition to the catalog. It is still the simplest and most straightforward collection of the group's material that it is possible to buy. It's beginning to end hits and essential tracks. It's also a great starting point if you want to discover the band before you dive off into another record. It's like the musical Mamma Mia but done correctly.

Sweden's biggest musical export! Included are a full 19 remastered hits, most notably Dancing Queen; Take a Chance on Me; The Winner Takes It All; Waterloo; Fernando , and The Name of the Game . 76 minutes of AM bliss. -Presented in a gatefold sleeve.

Anyone looking for the key to Abba's enduring appeal should look no further than "Voulez Vous" and "Gimme! Gimme! Gimme! (A Man After Midnight)" for their answer. There was an innocence to the Swedish quartet, even when they were singing about one-night stands and the invitations to them. Gold establishes that the band, while appreciated as campy, were actually multifaceted in their execution. "S.O.S." has a raw urgency in its chorus, and "Does Your Mother Know" draws its energy from classic '50s rock & roll. Likewise, you don't have to be Priscilla to swoon over "Mamma Mia" or "Dancing Queen." And when it comes to drama, those soaring vocals on "The Winner Takes It All" turn the song into a bitter anthem of every relationship that has ever fallen apart. The much-covered "Lay All Your Love on Me" is practically epic. --Steve Gdula

A-HA The Hits Of A-Ha -Headlines And Deadlines -