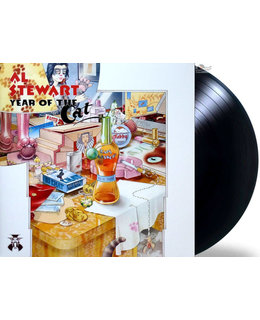 (1976 ) -2014 EU reissue on 180g vinyl-Al Stewart’s Year of the Cat catapulted this English prog-rock legend into gold and platinum territory upon its hit release in 1976. While previously achieving cult-like status in the states w...

2014 EU reissue on 180g vinyl  LP -the 7th studio album from the British folk singer-songwriter, engineered by Alan Parsons and featuring the hit title track " Year Of The Cat" and "On The Border." A fine collection of wonderful stories, beautifully played and sung.

Tracks:
A1 Lord Greenville
A2 On The Border
A3 Midas Shadow
A4 Sand In Your Shoes
A5 If It Doesn't Come Naturally Leave It

Al Stewart’s Year of the Cat catapulted this English prog-rock legend into gold and platinum territory upon its hit release in 1976. While previously achieving cult-like status in the states with his unique brand of folk/rock melodies and brilliant musicianship, Al Stewart finally received his well earned due with possibly one of the finest albums ever recorded in the classic rock era.

Produced and recorded at Abbey Road by rock icon Alan Parsons (Alan Parson Project/The Beatles/Pink Floyd) Year of the Cat was a stellar venture for both the artist and producer as its nine champion tunes have all truly stood the test of time. Aside from the massive top charting smash single "Year of the Cat," there were more classics contained like the brilliantly haunting "One Stage Before," the rocking fare of "If It Doesn’t Come Naturally," "Leave It" and the follow-up smashes "On The Border" and "Broadway Hotel."

ALLMUSIC: Al Stewart had found his voice on Past, Present & Future and found his sound on Modern Times. He then perfected it all on 1976's Year of the Cat, arguably his masterpiece. There is no overarching theme here, as there was on its two immediate predecessors, but the impossible lushness of Alan Parsons' production and Stewart's evocative Continental narratives give the record a welcome feeling of cohesion that keeps the record enchanting as it moves from "Lord Grenville" to "Midas Shadow" to "Broadway Hotel," before it ends with the haunting title track. Along the way, Stewart doesn't dwell too deeply in any area, preferring to trace out mysteries with his evocative lyrical imagery and a spinning array of self-consciously sophisticated music, songs that evoke American and European folk and pop with a deliberate grace. This could be unbearably precious if it didn't work so well. Stewart is detached from his music, but only in the sense that he gives this album a stylish elegance, and Parsons is his perfect foil, giving the music a rich, panoramic sweep that mimics Stewart's globe-trotting songs. The result is a tremendous example of how good self-conscious progressive pop can be, given the right producer and songwriter -- and if you're a fan of either prog or pop and haven't given Al Stewart much thought, prepare to be enchanted.