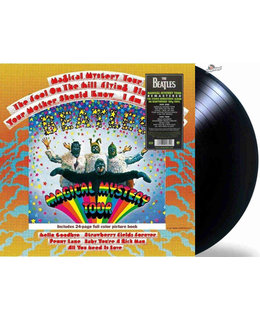 ( 1967 ) 2009 Remastered from orginal master tapes stereo, pressing on 180gr vinyl=The Beatles are turning awfully funny, aren’t they?” That was the reaction of the Queen Majes...

2009 Remastered from orginal master tapes stereo, pressing on 180gr vinyl=The Beatles are turning awfully funny, aren’t they?” That was the reaction of the Queen Majesty herself  upon hearing—or at least knowing of the existence—of Magical Mystery Tour, a wild romp through psychedelic pop that sprung from the same period as Sgt. Pepper’s. While some mistakenly view the album as a half-complete soundtrack, the record spills over with fantastic music—“I Am the Walrus,” “Hello Goodbye,” “Penny Lane,” and the unforgettable suite “Strawberry Fields Forever” leading the charge. Put on your rose-colored glasses. =Cut at Abbey Road Studios by a First-Rate Team of Producers and Engineers: Stringent Procedures and Safeguards Ensure Optimum Audiophile-Quality Sound

Tracks:
A1. Magical Mystery Tour
A2. The Fool On The Hill
A3. Flying
A4. Blue Jay Way
A5. Your Mother Should Know
A6. I Am the Walrus
B1. Hello, Goodbye
B2. Strawberry Fields Forever
B3. Penny Lane
B5. Baby You're A Rich Man
B6. All You Need Is Love

Part of Capitol/Apple’s quintessential Beatles catalog masters series on LP, Magical Mystery Tour has been remastered by a dedicated team of engineers that includes Guy Massey, Steve Rooke, Sam Okell with Paul Hicks and Sean Magee. Proper care and a painstaking series of steps were taken to ensure that music lovers would hear the Fab Four in all their glory with unprecedented clarity and transparency.

Listeners get a front-row seat for the pitch-shifted vocals and backwards percussion infusing John Lennon’s landmark “Strawberry Fields Forever.” A monumental composition, the song possesses a warmth, breadth, and spaciousness on  this analog pressing that will knock back even the most schooled Beatles aficionados. And of course, who doesn’t want to get caught up in the feel-good chants of “All You Need Is Love,” the accenting horns and spiraling orchestrations popping with immense color and texture. There’s reason why.

Electric Light Orchestra(ELO) Out of the BLue =180g vinyl 2LP=