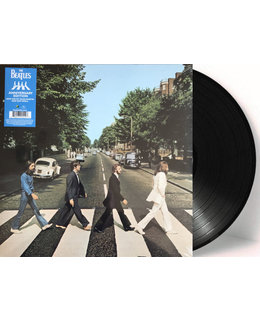 (1969) - 2019 Stereo Mix on 180g LP, by Giles Martin and Sam Okell Sourced at Abbey Road Studios from the Original Eight-Track Session Tapes: QRP-Pressed 180g LP of Beatles Abbey Road Sounds Exquisite =This 1969 Classic Recorded after Let It Be, but rele

Tracks:
A1 Come Together
A2 Something
A3 Maxwell's Silver Hammer
A4 Oh! Darling
A5 Octopus's Garden
A6 I Want You (She's So Heavy)

B1 Here Comes The Sun
B2 Because
B3 You Never Give Me Your Money
B4 Sun King
B5 Mean Mr. Mustard
B6 Polythene Pam
B7 She Came In Through The Bathroom Window
B8 Golden Slumbers
B9 Carry That Weight
B10 The End

Time to stroll across Abbey Road like never before. Fifty years ago, the world's most famous band stepped out from London's EMI Recording Studios to stride, single-file, across the black and white stripes of Abbey Road's nearby zebra crossing. With photographer Iain Macmillan balanced on a stepladder and one policeman stopping the street's light traffic, The Beatles crossed back and forth three times, led by John Lennon, followed by Ringo Starr, Paul McCartney, and George Harrison. Just six photos were taken, with the fifth selected as the cover shot for The Beatles' penultimate studio album, Abbey Road, named after the tree-lined street in which the studios are located.
The Beatles celebrate Abbey Road's anniversary with a suite of beautifully presented packages, including this QRP-pressed 180g vinyl LP reissue featuring the album's 17 tracks newly mixed by producer Giles Martin and mix engineer Sam Okell in stereo, sourced directly from the original eight-track session tapes. To produce the mix, Giles was guided by the album's original stereo mix supervised by his father, George Martin. "The magic comes from the hands playing the instruments, the blend of The Beatles' voices, the beauty of the arrangements," Giles explains. "Our quest is simply to ensure everything sounds as fresh and hits you as hard as it would have on the day it was recorded."

Released September 26, 1969, Abbey Road was not The Beatles' final album, as Let It Be followed in 1970, but it was the last one John, Paul, George, and Ringo recorded together as a band. Abbey Road was another blockbuster release for The Beatles, holding the No. 1 spot on the U.K. albums chart for a total of 17 weeks and topping Billboard's U.S. albums chart for 11 weeks. For their work on Abbey Road, Geoff Emerick and Phil McDonald won the year's Grammy Award for Best Engineered Recording, Non-Classical. In 1995, Abbey Road was inducted into the Recording Academy's Grammy Hall of Fame, recognizing "recordings of lasting qualitative or historical significance." The Beatles' best-selling studio album, Abbey Road's universal popularity and influence have continued to grow since its debut.
Part of Capitol/Apple’s quintessential Beatles catalog masters series on LP, Abbey Road has been remastered by a dedicated team of engineers that includes Guy Massey, Steve Rooke, and Sam Okell with Paul Hicks and Sean Magee. Proper care and a painstaking series of steps were taken to ensure that music lovers would hear the Fab Four in all their glory with unprecedented clarity and transparency.

That means that Paul McCartney’s infallible pop symphony that closes the album takes on additional poignancy, the polished arrangements breathing with greater warmth, immediacy, and detail. And the group’s guitar-based compositions—“I Want You (She’s So Heavy),” “Come Together”—are set up against a fantastic soundstage steeped in incredible depth, width, and height. George Harrison’s continued emergence as a primary songwriter, as his unforgettable contributions of “Something” and “Here Come the Sun,” comes into sharper focus as well.

With EMI’s legendary Abbey Road Studios providing the backdrop, the four-year restoration process combined veteran expertise, state-of-the-art equipment, vintage studio gear, and rigorous testing to net what is without doubt the highest fidelity possible and authentic, jaw-dropping sound guaranteed to rival the original LPs. There is no longer any need to pay hundreds of dollars for Japanese pressings.

Having made initial test cuts, Magee pinpointed any sound problems that can occur during playback of vinyl records. To rectify them, changes were made to the remasters with a Digital Audio Workstation. For example, each vinyl album was listened to for any ‘sibilant episodes.' vocal distortion that can occur on consonant sounds such as S and T. These were corrected by reducing the level in the very small portion of sound causing the undesired effect.

review Amazon
While Let It Be was their final release, Abbey Road was the result of the last time they recorded together in the studio. Despite the annonmosity and frayed tensions among the band, Abbey Road shows that they could produce music head and shoulders above everyone else. "Come Together" has a Chuck Berry riff and George Harrison's "Something" has became a standard with even Frank Sinatra recording a version. "Oh! Darling" has Paul McCartney flexing his vocal muscles and "Octopus' Garden" is a fun and goofy Ringo Starr composition. "I Want You (She's So Heavy)" is aptly titled as it has an urgency and yearning John Lennon vocal with heavy guitar playing. "Here Comes The Sun" is the best song George Harrison did with the Beatles with it's optimistic lyrics playing in stark contrast to the dark clouds surrounding the band at the time. The song suite that closes the album shows the band were still willing to push boundaries and it is appropriate it closes out with a song called "The End". Abbey Road marked the close of the recording career of the greatest group in music history. In the six years that they made music in the studio together, they produced songs that not only affected the music world, but the world as whole. From their hair, to their clothes to just about everything they did, they gripped the public's image and attitudes.