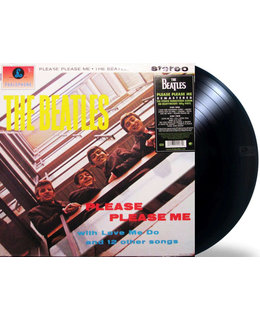 2012 EU Limited edition vinyl issue.=2009 Remastered from orginal master tapes, pressing on 180gr vinyl=With hits “I Saw Her Standing There,” “Twist and Shout,” and “Love Me Do” hThis is where it all begins. The album that ushered in rock n’ roll again and made it stay, the start of the British Invasion, the origination of Beatlemania and the culture-altering revolution that followed. You’ve waited decades for an analog copy of Please Please Me that exceeds the strictest sonic expectations. Finally, here it is. =Cut at Abbey Road Studios by a First-Rate Team of Producers and Engineers: Stringent Procedures and Safeguards Ensure Optimum Audiophile-Quality Sound

Part of Capitol/Apple’s quintessential Beatles catalog masters series on LP, Please Please Me has been remastered from the original sources by a dedicated team of engineers that includes Guy Massey, Steve Rooke, and Sam Okell with Paul Hicks and Sean Magee. Proper care and a painstaking series of steps were taken to ensure that music lovers would hear the Fab Four in all their glory with unprecedented clarity and transparency.

A document designed to capture the Beatles’ live energy of the time, and recorded in one 10-hour session, Please Please Me is built upon a combination of direct and ambient sounds gathered from group microphones. For the first time, you can detect the “leakage” encouraged to flow between microphones as well as the results of the close-miking techniques intended to tighten up the sound and yet, leave it loose—hence, the explosive vocals, partially a consequence of few microphone screens or baffles.

“I Saw Her Standing There,” “Twist and Shout,” and “Love Me Do” have never been so dynamic. And the band’s influences—girl group pop, rockabilly, blues, and hard-driving R&B—come through in the form of songs that seem simple but contain myriad complexities. You can distinguish the Gretsch Country Gentlemen 6122 from the Rickenbacker 425 guitars. Lennon’s lose-control vocal blowout on “Twist and Shout” hits a new level of wow. It’s all thanks to Capitol’s meticulous mastering.