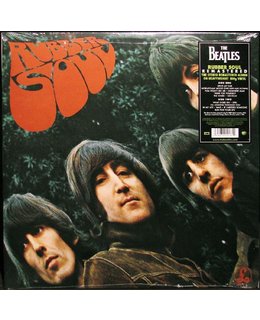 2012 reissue on 180g vinyl issue= 2009 Remastered from Original Analogue Tape= Rubber Soul signified a sea change for the Beatles. The record marked the emergence of John Lennon and Paul McCartney’s distinctive identities as songwriters. It featured an original (“Nowhere Man”) that went beyond the band’s commonplace love themes. And its sound departed from the echo-laden nature of its predecessors, an intentional move that offset it from the multiple bands that had been copying the Beatles’ style. Still, Rubber Soul retained a constant: It was yet another watershed collection of pop and rock by a group that redefined the genres as it went along.=Cut at Abbey Road Studios by a First-Rate Team of Producers and Engineers: Stringent Procedures and Safeguards Ensure Optimum Audiophile-Quality Sound

Part of Capitol/Apple’s quintessential Beatles catalog masters series on LP, Rubber Soul has been remastered by a dedicated team of engineers that includes Guy Massey, Steve Rooke, and Sam Okell with Paul Hicks and Sean Magee. Proper care and a painstaking series of steps were taken to ensure that music lovers would hear the Fab Four in all their glory with unprecedented clarity and transparency.

Hence, the definitive aspects of Rubber Soul are enjoyed like never before. Take George Martin’s piano solo on “In My Life,” half-speed overdubbed to make it sound like a harpsichord. Does it ever. Or Lennon’s pronounced intakes of breath during the choruses to the sweet “Girl.” You can practically feel the air moving into his lungs. The inimitable ringing of the sitar on “Norwegian Wood” becomes life-size. The unique tonalities of George Harrison’s newly acquired Fender Bassman amplifier are seemingly visceral in appearance.

Sonically, Rubber Soul claims a much drier sound, as the band elected to refrain from utilizing echo chambers and minimized the amount of reverb present on its earlier albums. The decision further distinguished the Beatles from their peers. And contributed to the impact of the music. Acoustically based, Rubber Soul is identified by hard-panned left-to-right channel production, which on this pressing throws the group’s instrumentation and vocals into greater relief. Even if you’ve heard Rubber Soul a thousand times, you haven’t truly experienced it until you hear this analog pressing.

Beatles, the Let It Be=stereo=