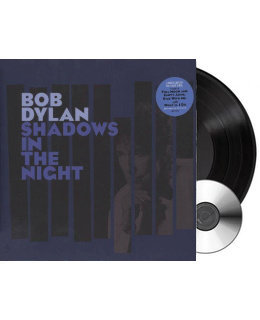 2015 EU 180g vinyl LP +CD =Shadows In The Night features ten covers of songs and standards sung by Frank Sinatra. The self-produced record focuses on stripped-down arrangements and saloon fare, such as that found on Ol' Blue Eyes' Where Are You? Sh...

2015 EU 180g LP + CD= Dylan Interprets Songs Made Famous By Sinatra=Bob Dylan's first new album in three years, and 36th studio set overall, Shadows In The Night features ten covers of songs and standards sung by Frank Sinatra. The self-produced record focuses on stripped-down arrangements and saloon fare, such as that found on Ol' Blue Eyes' Where Are You? Showcasing accomplished phrasing and patient pacing, the work has drawn critical acclaim and debuted at the top of the charts shortly after release. A genuine statement of pure artistry, Shadows In the Night defeats preconceived notions of what many believe Dylan to be.

Dylan commented, “It was a real privilege to make this album. I've wanted to do something like this for a long time but was never brave enough to approach 30-piece complicated arrangements and refine them down for a 5-piece band. That's the key to all these performances. We knew these songs extremely well. It was all done live. Maybe one or two takes. No overdubbing. No vocal booths. No headphones. No separate tracking, and, for the most part, mixed as it was recorded.”

Columbia Records Chairman Rob Stringer added, “There are no strings, obvious horns, background vocals or other such devices often found on albums that feature standard ballads. Instead, Bob has managed to find a way to infuse these songs with new life and contemporary relevance. It is a brilliant record and we are extremely excited to be presenting it to the world very soon.”

"What’s in the grooves is basically what went down, and most songs were completed in one or two takes. The resulting intimacy and spontaneity lend further credibility to an album that, by looking to the past, speaks volumes about the need for more musical truthfulness in the present."
--Bob Gendron, TONEAudio