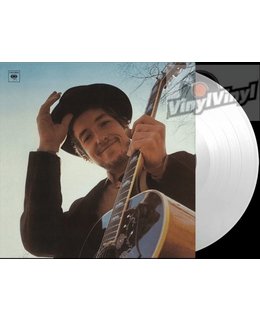 2021 EU repressing on limited coloured LP- Relaxed 1969 Album Soothes With Country Sounds and Amicable Simplicity. Songs Reflect Rustic Charm, Cozy Retreat, Idyllic Satisfaction:  with "Lay Lady Lay," "To Be Alone With You," "I Threw It All Away," "Tonight I'll Be Staying Here With You," as well as a duet with Johnny Cash on "Girl From the North Country" -- that have become country-rock standards.

Nashville Skyline was released in 1969, a country-rock album before country rock. It is a warm, pleasant record, one of Dylan's classic albums, but often missed out.

Building on the rustic style he experimented with on 'John Wesley Harding' (1967), 'Nashville Skyline' displayed a complete immersion into country music. Along with the more basic lyrical themes, simple songwriting structures, and charming domestic feel, it introduced audiences to a radically new singing voice from Dylan, who had temporarily quit smoking - a soft, affected country croon.

Bruce Springsteen Darkness On The Edge Of Town

Daniel Lanois For The Beauty Of Wynona