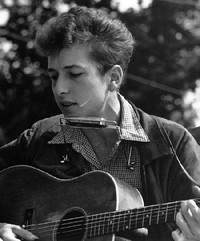 Bob Dylan is on the short list of the most influential artists of the 20th Century. He coupled a love for all forms of popular and folk music with a personal and poetic songwriting style instead of relying on professional craftsmen or standard tunes. Influenced by Woody Guthrie, Dylan proved that you didn't have to be a technically perfect singer or musician to make brilliant pop music. The songs on 1963's The Freewheelin' Bob Dylan catapulted the artist to stardom but he was already burning to get away from acoustic backing and match his unique vision to rock, country, and blues music. Dylan's music influenced a whole new generation of musicians -- such as the Beatles or Stevie Wonder -- to start crafting songs about what was important to them. While Dylan kick-started Folk and Country Rock in his '60s studio work, the ragged home recordings he made with the Band showed that not even poorly placed microphones could stifle brilliance. Dylan tours constantly these days and records less often then he used to, but as albums such as 1997's Time Out of Mind prove, the man still has a lot to say and continues to do it in a way that no one else can.

( 1989 ) 2020 US Numbered Edition Gain 2™ Ultra Analog 45RPM 180g Series – - The long-awaited next volumes in Mobile Fidelity’s successful series of Bob Dylan albums have been announced: a 2-LP 45rpm edition of Oh Mercy is available now, and a further 2-

( 1963 ) 2018 reissue on 180g LP stereo version - The second studio album from the iconic folk artist featuring the anthemic opener Blowin In The Wind The Freewheeling Bob Dylan is obviously one of the classic albums of all time and is now considered...

( 2006 ) 2017 EU reissue on 180g vinyl 2LP=This 2006 album continued its predecessors' tendencies toward Blues, Rockabilly and pre-Rock balladry, and was self-produced by Dylan under the pseudonym "Jack Frost".

2016 EU reissue on 180g 2LP-The Essential Bob Dylan is a fine choice for the casual listener that just wants all the songs they know on one collection -- it's Dylan's equivalent of Beatles One.("Blowin' In the Wind," "Don't Think Twice, It's ...

(1965)2015 EU repressing on 180g LP- Recorded amidst a time of unfathomable turmoil and frustration that witnessed Dylan booed by fans, labeled a traitor, and call into question his work, Highway 61 Revisited roars and snarls, jabs and criticizes. Its bon

BOB DYLAN - Bringing it All Back Home = vinyl LP =

(1965)2015 EU repressing on 180g LP- Bob Dylan’s Bringing It All Back Home represents the moment that pop and rock music became their own art form, expressions finally treated with the same seriousness and respect as classical and jazz. Incalculably influ

2015 EU 180g vinyl LP +CD =Shadows In The Night features ten covers of songs and standards sung by Frank Sinatra. The self-produced record focuses on stripped-down arrangements and saloon fare, such as that found on Ol' Blue Eyes' Where Are You? Sh...