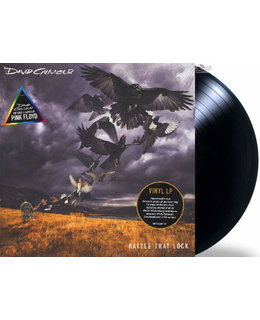 2015 EU issued on 180g vinyl LP+booklet- Pink Floyd guitarist/singer David Gilmour returns with his fourth solo album Rattle That Lock. The stunning 10-track set follows his 2006 UK #1 record On An Island. The primary lyricist for the new album was Gilmour's long-term writing partner, Polly Samson and it was co-produced by Gilmour and Roxy Music's Phil Manzanera.

The title track, "Rattle That Lock" begins with four notes, created by Michael Boumendil, which precede announcements at French SNCF railway stations which Gilmour recorded on his iPhone at Aix-en-Prevence station. Samson's lyrics are inspired by Book II of John Milton's Paradise Lost, which is also featured in her recent acclaimed novel, The Kindness.

The single also features The Liberty Choir and singers Mica Paris and Louise Marshall. Rattle That Lock's striking cover was art directed by Dave Stansbie from The Creative Corporation under the creative directorship of Aubrey Powell from Hipgnosis.

Track:
A1 5 A.M.
A2 Rattle That Lock
Written-By – Michaël Boumendil
A3 Faces Of Stone
A4 A Boat Lies Waiting
A5 Dancing Right In Front Of Me
B1 In Any Tongue
B2 Beauty
B3 The Girl In The Yellow Dress
B4 Today
B5 And Then…

Roger Waters Is This The Life You Really Want =2LP=

Dire Straits/Mark Knopfler Down The Road Wherever =180g vinyl 2LP =