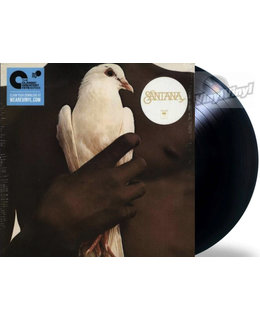 ( 1974 ) 2018 EU reissue on vinyl LP -with tracks like the beautiful masterpiece "Samba Pa Ti" and the hard rocker "Hope Your Feeling Better," As one of the most enduring albums in their massive career catalog, Santana’s Greatest Hits also in...

2018 EU reissue vinyl LP =As one of the most enduring albums in their massive career catalog, Santana’s Greatest Hits, also includes significant album tracks like the beautiful masterpiece "Samba Pa Ti" and the hard rocker "Hope Your Feeling Better," which features the powerful Gregg Rollie (Journey) on lead vocals and keys and the stunning lead guitar work of Carlos Santana and Neal Schon (Journey). All in all, this is a collection of songs which remains a must have to this day!  Housed in a gatefold with the original album cover design and inner sleeve artwork.

The legendary Santana set the music world on fire back in the late sixties out of San Francisco with their hypnotic blend of Latin-fused rock, jazz, and soul, augmented with brilliant and skillful musicianship of their leader and guitarist Carlos Santana. Bursting on the scene initially with the worldwide smash hit single "Evil Ways," this first offering would prove to become the huge catalyst for things to come.

For their first three smash albums, Carlos Santana would take the band to the top of all the popular music charts as these sessions would yield a plethora of hit singles. Their performances were of legendary proportion, culminating with a 1969 Woodstock performance which made them one of the most successful live acts of the classic rock era.

Columbia Records honored the hugely popular band with their first best of album simply titled Santana’s Greatest Hits in 1974. Filled with a treasure trove of chart topping singles and hit album tracks from their smash albums, this incredible LP awarded these rock legends with another platinum plus effort.

No stone is left unturned, as this 10 track masterpiece is loaded with hit after hit with smash singles like "Evil Ways," "Jingo," "Oye Como Va," "Everybody’s Everything" and of course their much celebrated interpretation of Peter Green’s/Fleetwood Mac classic "Black Magic Woman."