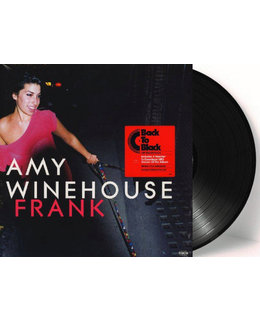 Label:  Island
Availability:   In Stock
Delivery time:
€27,95 Incl. VAT (BTW)
Release date: 09-06-2004(Originally released in 2003)
2004 EU ediotin repressing on 180g vinyl LP+MP3-Much can be said about the late Amy Winehouse, one of the U.K.’s flagship vocalists during the 2000s. The British press and tabloids seemed to focus on her rowdy behavior, afflictions and tragic end, but fans and critics alike embraced her rugged charm, brash sense of humor, and distinctively soulful and jazzy vocals.
Her platinum-selling breakthrough album, Frank (2003), elicited comparisons ranging from Billie Holiday and Sarah Vaughan to Macy Gray and Lauryn Hill. Interestingly enough, despite her strong accent and vernacular, one can often hear aspects of each of those singers’ vocal repertoire in Winehouse’s own voice. Nonetheless, her allure had always been her songwriting - almost always deeply personal but best known for its profanity and brutal candor.
With contributions from hip-hop producer/keyboardist Salaam Remi, Winehouse’s amalgam of jazz, pop, soul, and hip-hop received rave reviews. The album was nominated for the 2004 Mercury Music Prize as well as two Brit Awards, and its lead single, “Stronger Than Me,” won an Ivor Novello Award for Best Contemporary Song.
Tracks:
A1. Intro / Stronger Than Me
A2. You Sent Me Flying
A3. Know You Now
A4. Fuck Me Pumps
A5. I Heard Love Is Blind
A6. (There Is) No Greater Love
B1. In My Bed
B2. Take The Box
B3. October Song
A4. What Is It About Men
B5. Help Yourself
B6. Amy Amy Amy / Outro
Discs: 1
Drager(LP,EP,12,7,CD): LP
Qual(120grs,150grs,180grs): 180grs
Speed(33,45): 33
Label: Island
Originally released: 2003
This release: 2004

Janis Ian Between The Lines