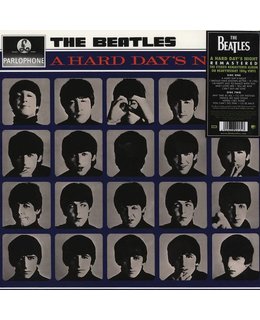 2012EU STEREO 2009 Remastered from Original Analogue Tape, pressing on 180gr vinyl=The first Beatles album to feature all-original material, A Hard Day’s Night affirmed the band’s top-of-the-world-ma status and served as the soundtrack to the film of the same name, a movie that, like the album, helped change the world. Galvanized by the arrival of new gear and methods in the recording studio, the Beatles went for broke and came up aces. This superb LP pressing allows you to hear the magic like never before.=Cut at Abbey Road Studios by a First-Rate Team of Producers and Engineers: Stringent Procedures and Safeguards Ensure Optimum Audiophile-Quality Sound

Tracks:
A1 A Hard Day's Night
A2 I Should Have Known Better
A3 If I Fell
A4 I'm Happy Just To Dance With You
A5 And I Love Her
A6 Tell Me Why
A7 Can't Buy Me Love

Part of Capitol/Apple’s quintessential Beatles catalog masters series on LP, A Hard Day's Night has been remastered by a dedicated team of engineers that includes Guy Massey, Steve Rooke, and Sam Okell with Paul Hicks and Sean Magee. Proper care and a painstaking series of steps were taken to ensure that music lovers would hear the Fab Four in all their glory with unprecedented clarity and transparency.

With the addition of a REDD.51 mixing console at their disposal at Abbey Road, a device that increased the level of communication between producer, engineer, and band, the Beatles upped the ante not only in memorable songwriting and joyous emotion, but definitive sonics. And so now you can almost feel the repeat echo on the title track, a cue that regenerates delay and adds to the tune’s spaciousness. Similarly, the harmonica shiver on “I Should’ve Known Better” rings out with amazing purity and expansive reach.

Most significantly, the LP frames the fairly crisp top-end sound of Ringo’s drums. Throughout, his strict orders to hit the snare solidly in the middle (and not on the rims) unfold in the form of involving rhythmic beats that now seem as if they’re happening right in front of you. As for the unique 12-string jangle created by George Harrison’s Rickenbacker 360-12 12-string guitar, employed for the first time on this 1964 effort? It positively sweeps over the soundstage, preceding the likes of the Byrds. And those voices. Mesmerizing. Here’s also why you need this analog pressing: